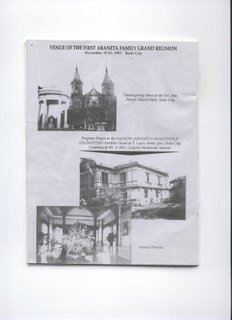 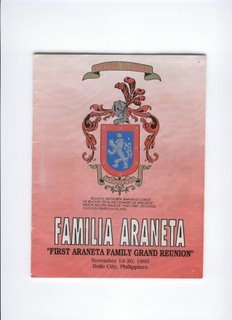 From as far as Ilocus up in the North, down to Davao in the South, they came from all parts of the country. Some came by land and by sea, others came via commercial airlines and still others came in their own private airplanes. The same destination Iloilo City. The same purpose, to attend and participate in the "First" Grand Reunion of the ARANETA CLAN last November 19 & 20, 1993.

The affair on the 20th started with a Thanksgiving Mass at the historic Santa Ana Church in Molo, Iloilo City officiated by Archbishop Alberto Jover Piamonte. It was followed by a sumptous lunch-buffet at the Sanson-Araneta/ Montinola-Jalandoni "Antillan House" at Jaro, Iloilo City. The venue courtesy of Mr. & Mrs. Gregorio "Greg" Sanson y Montinola, grandson of Dona Isabel Soriano Araneta de Sanson.

Emcee during the morning program was Pablito V. Araneta, Board Member of the 4th District of Iloilo and grandson of Gen. Pablo Soriano Araneta.

Highlights of the program was the presentation of each family lineage and delegations coming from various parts of the country by Dinggol Araneta Divinagracia, which includes the Bago City Aranetas' who registered the biggest number of participants.

In the afternoon; kinship was either discovered or renewed during the fellowship, games and business meeting.

During the evening program, delegates who belong to the "Araneta Circle of Senior Members" were recognized and properly honored by clan members.

Likewise, the latest member of Congress and grandson of past Philippine President Manuel A. Roxas; the young and ever smiling scion of the Roxas-Araneta Clan of Capiz, Manuel "Mar" Araneta Roxas drew much attention. He has the very rare distinction of having descended from three branches of the family. With him, in that category are Lourdes "Lulu" Sitchon Araneta-Villarosa and Ma. Magdalena "Diting" Gonzaga del Castillo-Sia who were also present.

The Tionko-Araneta Clan headed by the Tionko brothers: Romeo, Efraim and Mariano registered about 25 delegates; 9 who flew over from Davao City (descendants of Vicente Araneta Tionko and Vicenta Suazo Demonteverde) were: Jose Hizon Tionko with his sons; J.T. and Tommy; also Shella and Ana Vi, children of Ana Socorro Tionko Laxa. Other delegates of this clan came from Negros but mostly resides in Iloilo. Trinidad "Booday"Tirador Tionko, the Araneta Family Members Association's Treasurer is the daughter of Marianing Galan Tionko and Victoria Tirador-Tionko.

Attendance of the Araneta's of Anilao, Iloilo headed by Sangguniang Bayan Member Paterno Aponte Araneta includes Francisco, Ninfa, Mauricio and Warlito Araneta. Also, Asuncion Araneta Pedroso, Milagros Araneta Caro and Samuel Araneta Pedroso. They are descendants of Pantaleon Araneta who left Molo to settle in Sto. Rosario in Anilao, Iloilo during the early part of the 19th century. The descendants of Eusebio Araneta; Andrea Araneta-Zaldarriaga who came was Senene Araneta-Arano; also Raul A. Belita from Capiz with wife Lydia and members of their family.

The delegates of the Atanacio Araneta y Dionson clan were Laura Araneta-Lizares, Lourdes and Montserrat Araneta as well as Amparo Araneta-Cusi and Milagros Araneta-Cusi.

Dona Maria Rica Araneta-Matti, the other surviving daughter of "Tan Juan" was represented by Fedick and Berting Matti, and Ma. Fe Matti-Dilag.

The Federico Matti and Consolacion Araneta de Matti clan was led by Negros Occ. 4th District Congressman Edward Miller Matti with wife Gigi Araneta-Matti and son Leonard. The brothers Maximo and Eduardo Matti were also around together with Jose "JP" Yulo, grandson of Carmen Araneta-Matti and Arsenio Yulo, Sr. & others.

The descendants of Don Marciano Yulo Araneta, erstwhile "Presidente Municipal" of Bago, Negros Occidental were well represented which includes the Aranetas' of Cubao, Quezon City and the Canlubang Estate in Laguna. Led by the matriarch of the family; Dona Eva Araneta-Serra (wife of an illustrious ilonggo; the late Dr. Tomas Serra). She was the most sought-after person during the reunion as she knows the Araneta Family Tree like the palm of her hands. She came came with her son, the "Muy mucho macho" Enriquito Araneta Serra. Also available to give Manang Eva a helping hand was her younger sister Lucy Locsin Araneta-Solinap and her children.

Incidentally, Eva Araneta-Serra was elected Chairperson of the Board of Trustees of the Araneta Family Members Association which shall be processed for registration as the "Araneta Family Foundation, Inc.", a non-stock, non-profit family corporation.

Still from this side of the family, those who came were Manolet Araneta and wife Mila Cacho-Araneta together with their children who were among the first to respond to the call of a Family Grand Reunion, namely: Suzanne Araneta-Ledesma, Cecile Araneta-Cacho and Liza Araneta-Marcos. They came with several members of their familias. Suzanne and Cecile are actively involved in up-dating the Araneta Family Genealogy.

The Felix Militante Araneta and Paz Ditching Soriano-Araneta clan of Molo, Iloilo City had quite a big delegation represented, as follows:

The First Araneta Family Grand Reunion in Iloilo City last November 19 and 20, 1993 was indeed a success. It was most memorable as cousins of various degrees got to know each other for the first time; some who are friends for many years only then learned that they have similar bloodline; and some who had only seen each other when they were still kids met again after several years---all thanks to the Grand Reunion.

Everyone is looking forward to the next Grand Reunion scheduled in Bacolod and in Bago City, Negros Occidental three years from now.

With the enthusiasm, eagerness and cooperation as shown by all the members of the Araneta Clan who attended the affair, there is no doubt that the brotherhood of the Araneta ancestors will surely continue to future generations.

Nota bene:(With apologies to delegates not mentioned due to lack of material informations)

I would like to know and verify if there's a name "Don Gaudencio Araneta (origin from Silay) and eventually moved in to Quiapo,Manila (near Calle Castillejos) in the early 1900s. My grandmother who is now 93,comes from the Araneta clan. Her family was one of the old family residents of Quiapo. If there are infos, pls do let me know. Gracias!

Does anyone have a better resolution picture of Lolo Juan's house in Bago? I can only find small and very poor quality in the web.Thanks if you have one pls email it to me at judgenut74@gmail.com and i will post them up on our Familia friendster account.

Hi, my name is Gizella and I'm one of Ruperto Araneta Jaleco's grandkids. When my granddad was young, he left home to be in the army [served in the philippine army aswel as the american army]. Ever since then, he never went back. He's originally from Iloilo. He is also the only child [mom side:Araneta, dad side:Jaleco]. He never mentioned about his family back home so I'm here seeking for answers. He recently passed away on June 2008. If anyone, i mean anyone is familiar with the name
2LT RUPERTO ARANETA JALECO, please e-mail me @
gmac85@telus.blackberry.net ... thank you for your time in reading this ...

A lover of nature & reform activist by profession; a genealogist & environmentalist by avocation. A cooperative movement advocate, history buff & an amateur "newbie" writer.